The Oyo State Information chapel of the Nigerian Union of Journalists (NUJ), on Tuesday held its congress, where new executives were sworn-in.

The Commissioner for Information, Culture and Tourism, Dr. Wasiu Olatunbosun charged the new excos to work as a team to promote the welfare of its members. 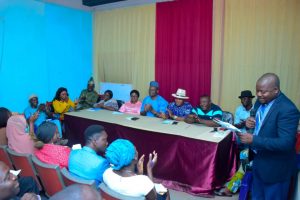 While he congratulated the new executives, Dr. Olatunbosun also pledged his commitment to the progression of the Chapel, under his watch as Commissioner.

Babalola, who led the State Council executives of NUJ to the inauguration at Ministry of Information, Culture and Tourism urged the new executives to prioritise service, while imbibing culture of all inclusiveness.

“You need to work together in unity to improve the welfare of this chapel,” he said.

He advised the new excos not to be confrontational with the management, saying that issue must be solved through dialogue.

Babalola commended members of the chapel for the love and unity, spirit of sportsmanship exhibited during and after the electoral process.

He urged members of the new exco to be patient, good listeners while deliberating on salient issues that concern the chapter.